Whether it is literature, cinema, music, games or even current affairs it is undeniable that one of the foremost methods we have for understanding the world around us is narrative. In holding such an indispensable place in our epistemology, both as individuals and societies en masse, it is clear narratives are important.

During the early days of cinema, narrative quickly tightened its grip around the medium. As such, mainstream cinema over the past century has been almost indistinguishable from story. From Citizen Kane (1941) to Parasite (2019) we all have a relatively strong idea of what the spectrum of cinematic narratives holds.

Since their inception, video games have had a much more complex relationship with narratives. But that is not to say gaming has been averse to story. Quite the opposite. Video games continue to craft nuanced methods of presenting and delivering narratives to players—both in ways which reflect cinematic storytelling, and those more specific to the interactive medium.

Of course, before diving into what narrative means for the medium of video games we have to fully understand what we mean by narrative in the first place.

H. Porter Abbott’s definition, posited in 1978, seems both general and applicable enough to span all the modern forms of media narratives—defining narrative as “the representation of an event or a series of events”. (2)

But while such a definition is easily identifiable in linear media—such as literature, cinema and music— it becomes a little more complex when games begin to play with non-linearity. But, as games take a while to reach that point, let’s start at the beginning.

Although the majority of games in this early period of the medium continued focused on gameplay, fun and experiences instead of narratives, the earliest video gaming narratives are still to be found in gaming’s early years—often cited as originating in one of two places.

First, we have the text-based adventures such as The Sumerian Game (1964). This text-based strategy game saw players manage land and resource while playing out three generations of rulership over a kingdom of pre-scripted events.

However as many discount the early days of text-based gaming, many cite the first graphical narrative as the first video-game narrative. And with that, Donkey Kong (1981) is often cited. Here Shigeru Miyamoto, the lead designer on Donkey Kong, had a different idea to the literary-like narratives of text-based adventures. Instead Miyamoto “wanted to make sure the whole story, simple though it was, could be told on screen in a way that could be instantly grasped by players”. (3)

While video game narratives remained in the minority in the medium’s early days, they quickly evolved past Miyamoto’s simplicity. Games like Final Fantasy (1987), System Shock (1994) and Thief: The Dark Project (1998) foregrounded narrative and began to integrate it with gameplay elements and decision- making.

That said, these, among other narrative projects of the time, often found their narratives sitting largely outside of players’ control. Games like Crash Bandicoot (1996) did contain narratives, but the player would only go from A to B to be delivered narrative exposition, without directly influencing or playing that narrative themselves. In other words, narrative and gameplay were yet to be integrated.

But as the new millennium rolled in, so did a rapid change in the mainstream appreciation of videogame narratives. For example, Grand Theft Auto III (2001) and Max Payne (2001) managed to transpose the look and feel of cinematic narratives into game worlds. These experiences provided players with sprawling long-form narratives that incorporated a wide variety of characters, storytelling techniques and emotional affect along the way.

Before we go any further; let’s consider the main types of video game narrative which became commonplace post-2000.

Although scholars and critics might argue over these categorisations, for simplicity’s sake we can categorise video-game narratives into three types:

The graphic below provides a clear visualisation of this concept. 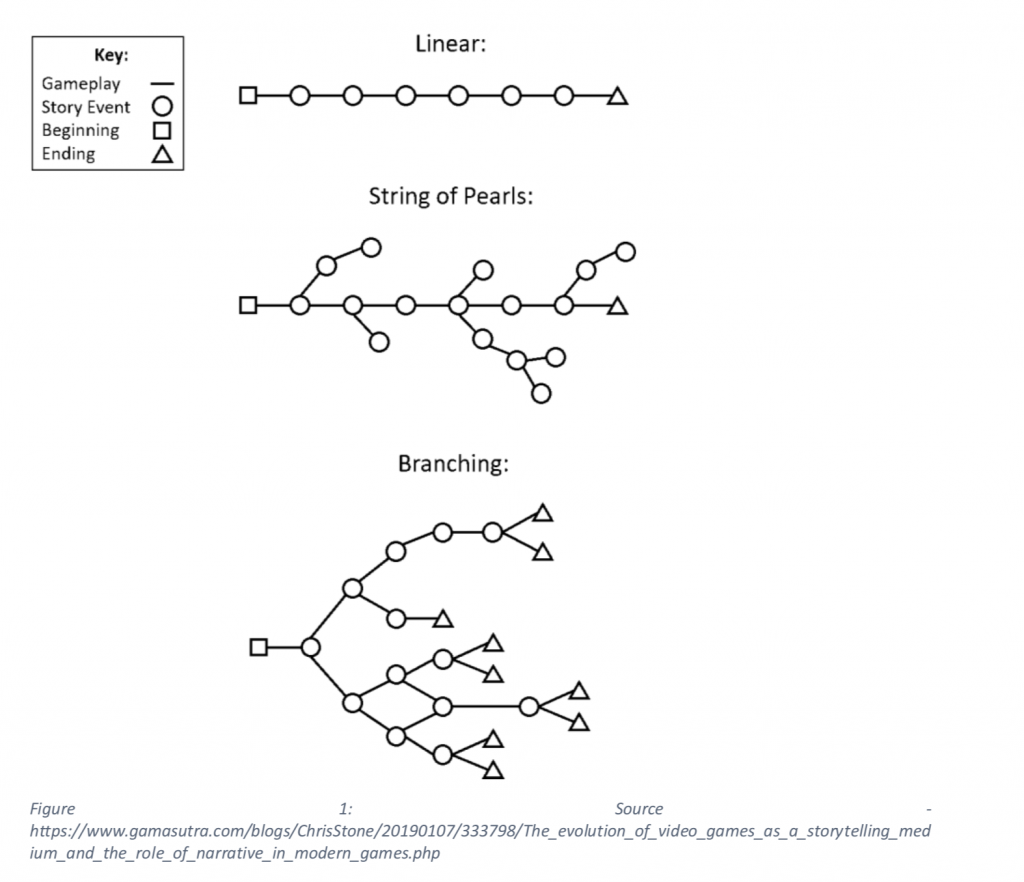 While these types of narrative describe the formation of a video game narrative, I will go one step further with this distinction to create two categories of narrative style. For the sake of this article, they will be called Cinematic-style narratives and True Gaming narratives.

Considering titles like Grand Theft Auto III (and it’s following franchise) or Max Payne, it is easy to look at their cinematic counterparts as direct inspiration. However, this inspiration goes a lot deeper than their references to cinematic culture and narrative tropes, but into the very type of narrative they create. Max Payne forms a singular linear narrative where each level is played through sequentially, in a set order, to form a coherent narrative experience not dissimilar to that of watching a film. And although structured very differently as a string of pearls narrative, Grand Theft Auto III achieves something very similar by providing a more-or-less linear central narrative with optional offshoots alongside the possibility for emergent player-made narratives provided by the sandbox environment.

Countless modern games can be seen in a similar light—from mainstream entries like the Uncharted franchise and The Last of Us (2013) to indie offerings such as SOMA (2015), Gone Home (2013) or Firewatch (2018). All these titles provide a more-or-less linear narrative which players are invited to take part in. While some do occasionally, ask the player to make decisions to affect story details these remain for the most part inconsequential within the cinematic-style game.

By adopting the structure of an (overall) linear narrative, these gaming experiences seek to provide players with set narrative beats which are made to provoke specific thoughts, emotional reactions and memories in players. As such, they are often rife with emotional flourishes, well-timed plot twists and vibrant character arcs.

Of course, many of these narratives such as that of Uncharted are on the one hand there to “logically funnel you [ the player] from one segment of gameplay to the next”. (4) In such a way providing players with reason to keep playing to the end of a game. On the other hand, titles like Firewatch or Gone Home—which both fall into the often-slammed genre of the walking simulator—rely on narrative as their main attraction, foregrounding it in front of gameplay.

The pinnacle of the cinematic narrative, however, lies somewhere in between. This is where iconic games such as The Last of Us, Red Dead Redemption and, more recently, Death Stranding lie—where, in the words of Chris Bowring, “the story and gameplay is one cohesive whole.” (5)

However, the cinematic-style narrative is not perfect. Often bogged down by cutscenes—extended periods of pre-rendered or live-action animation where the player has no influences and must simply watch—quick-time events or a lack of player choice, the cinematic-style narrative can easily be seen as not wholly suitable to the medium of video games. But that’s where our second category comes in.

In order for a video game to classify as a video game, the player must interact with it via some sort of human interface device such as a controller or a mouse. In other words, the player must play. And with such control, the player exerts an immense amount of player choice which results in in-game consequences.

As such, at least for me, True gaming narratives utilise this factor to its fullest potential providing a narrative experience which is driven and influenced by the player at every turn.

Due to this reliance on player choice and consequence, the majority of these narratives fall into the branching narrative type—utilising multiple pathways for players to endeavour down in order to attain different results.

This can range from the whodunit choices in LA Noir (2011) to the profoundly provocative choices in The Stanley Parable (2011). Both provide players with choices which will fundamentally change their experience of a title, by offering different content to different players dependent on their choices.

However not all of these narratives require such a level of non-linearity to create a true gaming narrative. Gameplay and experience-driven experiences can, in my eyes, also be classed as true gaming narratives in the event that they provide players with the capacity to experience a narrative in a way which is wholly reliant on their engagement with a piece. As such the Dark Souls franchise, Journey (2012) and Her Story (2015) allow players to interact with a more-or-less linear narrative in unique ways from beginning to end. These titles allow players to interact with as much or as little of the “narrative” as they like, instead foregrounding the affect provided by their mystery and ambiguity.

Such an experience then relies on player experience as a narrative tool, instead of a pre-scripted narrative which is unfolding at a set pace with set narrative beats.

In this way, these narratives display the potential of gaming narratives to offer something completely new to the world of storytelling. A new interactive style of storytelling distinct from the modes of storytelling found in literature, cinema and music which keep the audience as a spectator, at arm’s length.

As put so eloquently by Chris Stone: “If books, movies, television, and music seek to tell the stories of the artists behind them, then modern games tell the user’s story.” (6)

Today, storytelling in video games means many things. It can mean experiencing a cinematic-style narrative which provides a clear-cut beginning and end, along with defined emotional beats. It can mean a true game narrative which favours ideals of non-linearity, multiple endings and ensuring each player has a unique experience. It can even go as far to include what we will call self-made narratives— such as the emergent narratives players of Minecraft (2009) and other sandbox titles indulge in.

In short, video game narratives are complex. They offer variety of types and styles resulting in an overwhelming amount of variation, reflecting the incredible potential of the medium to flex and mould to a variety of different forms and formats.

However, by considering True game narratives as a form of narrative unique to the medium of video games, we can create a larger divide between video game narratives and cinematic narratives. In doing this, we can hope to eradicate some of the competitive comparisons which often praise gaming narratives when they rival or reflect cinema, and scold them when they stray from that formula.

In such a way, we can all—both gamers and non-gamers—begin to wholly embrace the fact that video- game narratives have great potential for providing players with a wide variety of narratives, whether they reflect the tropes of previous narrative media or introduce something completely unique to the medium.

4 C. Bowring, “How Narrative Has Evolved in Video Games – A History of Naughty Dog”, WordPress, 2017.

5 C. Bowring, “How Narrative Has Evolved in Video Games – A History of Naughty Dog”, WordPress, 2017.

C. Bowring, “How Narrative Has Evolved in Video Games – A History of Naughty Dog”, WordPress, 2017.

C. Stone, “The evolution of video games as a storytelling medium, and the role of narrative in modern games”, Gamasutra.com, 2019

It is worth noting that talent in the wider entertainment industry has embraced video games as a legitimate storytelling outlet. Stars like Martin Sheen, Willem Dafoe, Vin Diesel, Rami Malek, Kit Harington, Keanu Reeves, Ellen Page, John Goodman, Cara Delevingne and many others have acted in video games, offering their performances and likenesses to the gaming experience.

What Are Some of Your Favorite Video Game Narratives?

Leo is a filmmaker and freelance writer keen to explore the expansive definition of “cinema”—from traditional narrative filmmaking to abstract VR experiences. Working within the collective audio-visual platform Cinema Not Cinema he endeavours to produce, distribute and discuss an array of cinematic works, drawing the expansive fringes of Cinema together in one place.